What is the power of a million? 

CISA was reintroduced and passed -- secretly buried in a 2000 page budget bill.

The people woke up. The cows came home. The fascist tactics of dogs and snipers folded for the day. Cowboys are still the coolest, just like when I was a kid.

I will just call this piece "Bunkerville." The word "bunker" best conveys the siege mentality that existed at times, even if it took place in the wide open valley of sage and sky. All of the word-play titles have already been taken, a couple of dozen times each, but I still like them: "How the West Was Won," "Til the Cows Come Home." This essay will not offer insight into the issue, or perhaps convey the gravity it deserves. It is, rather, merely a recounting of being a part of a historic day that unfolds in the way things can unfold, chaotically, fueled by good intentions but side tracked by imperfect knowledge as situations swing from tense to absurd to triumphant.


Many words have already been said by those who know a lot more on this issue (and many who seem to know less but think they know more). Is it over? Is it just a trick that will be reversed by tomorrow? Who knows? Is this really about oil, about Senator Reid and family contracts, the tortoise? What do the laws say about the Bundy family's legal position? I would like a definitive answer. That won't necessarily come from the courts themselves, I think we can agree. 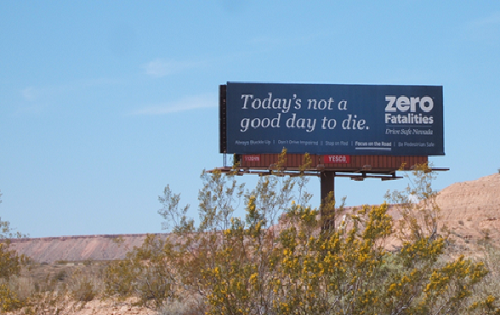 This is the sign that greeted me as I cleared the Virgin River Gorge and bypassed Mesquite. Was it an omen? Did my wife commission it as a reminder of my assurance that there wouldn't be any trouble and my promise to stay away from it if there was. 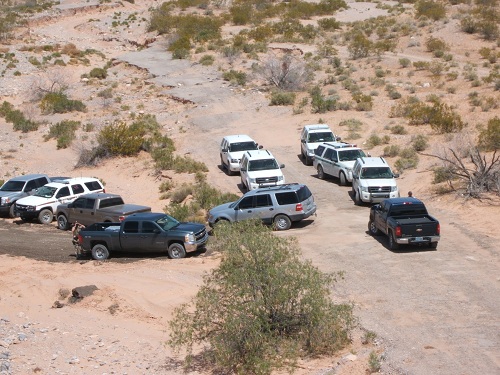 I was mistaken in telling my wife there would be no tense standoff, and I happened upon it just two miles later. But I was oblivious to it. Me to myself: "Wait, why are all of these people HERE on that hill. The gathering is supposed to be eight miles down I-15. Oh well, I may as well park here along these two dozen no-parking signs and see what those people are looking at down there."

Down there were a pack of police cars and a man with a bull horn yelling that we few people on the bridge were in a restricted area and would be arrested if we didn't move. Hmmm. Okay already; the BLM SWAT were just as advertised. The bull horn was cracking me up. Some kind of phallic enhancer symbol.

Well, I guess I'm some kind of real life Forrest Gump, happening upon history while oblivious to the situation I was in. It wasn't until later that I learned it wasn't the dozen people on the bridge that were being threatened, but the couple hundred people under the bridge, pushing their way through a fence. Across from them was a line of plastic-shield armored, tear-gas-launcher-armed officers.

All I'm thinking is, "If we have all these cars and people here, imagine the action taking place at the official site. I gotta get there." Sorry about the disappointing picture in a photo essay on the most powerful part of the day, but I'm telling you, that dude with the bull horn was adamant that I move. 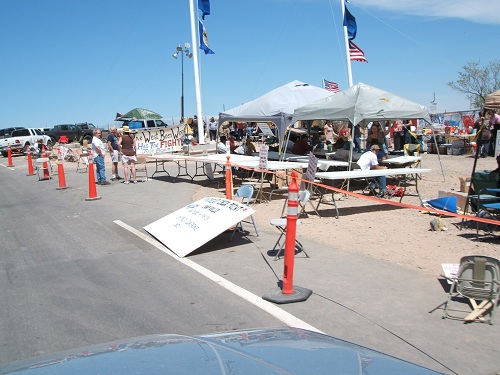 And this was the official, announced site. It was a ghost town. What kind of protest was this with people spread all over, ambling around, no real purpose. Somewhere, surely, there was a middle ground of protesting purpose between just gathering to chill and the other extreme of dreaming of starting Armageddon then and there.

Earlier in the day, in fact, this spot had been the center of words and action. Mr Bundy had called upon the govt officers to surrender their weapons within a half hour. This does not seem to me to be an effective starting place for talks, but maybe they were just building in some room for negotiations. Surely there was a bit more to the speech that makes more sense. Please, if someone reading this has a transcript of the speech, please post it in the comments box below. 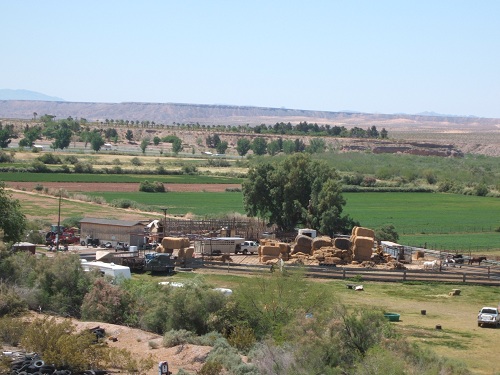 This led to my private adventure of the day. I'm thinking maybe there is another gathering onward at the actual ranchyard that my printed directions were guiding me to. In my role as a reporter, I needed to press on. Of course, I'm not a real reporter, per the definition of Senator Diane Feinstein and that insidious "Reporter Shield" law. Nope, just a blogger.


I park on a mesa and shoot the above picture, fascinated by the layers in the scene I behold, from junked cars below, to the hay and tractors of a functioning ranch yard in the middle distance, to the Palm Springs-style row of palm trees adding incongruous elegance in the distance. To the side is a batch of a dozen tents of militia gathered to "protect Bundy."

It seems I was perceived as a threat. And if the gossip that more snipers had zeroed in on Mr Bundy this very day are accurate, it is no wonder. But still. A truck comes screeching up behind me. A thirty-ish-year-old man in a flak jacket and assault rifle -- literally riding shotgun while his wife drives -- starts yelling at me to "[Blankin] get out." Whether it was my commitment to my wife to stay out of trouble, or the gun itself in the hands of the non-negotiator, I refrain from calling him Rambo and Patrick Swayze ("Wooolveriiiiiines") to his face, but I at least hazard a "We are on the same side, yo."

I think I am preaching to most of us that fascism must not be the tool of anti-fascists. And this is a serious fear of mine, the French Revolution syndrome. You with me on that, Citizens? 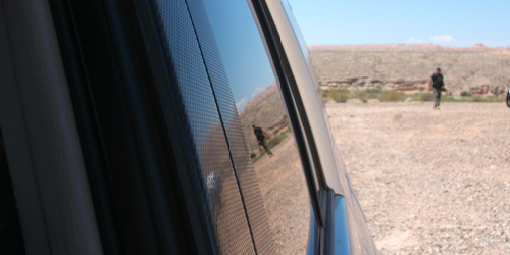 Like a little kid biking away from a fight before turning around for a final taunt, once I was away from him, I hung the camera out the window to get that photo I was craving.

I confess I ought not have been overlooking the home in such a situation. 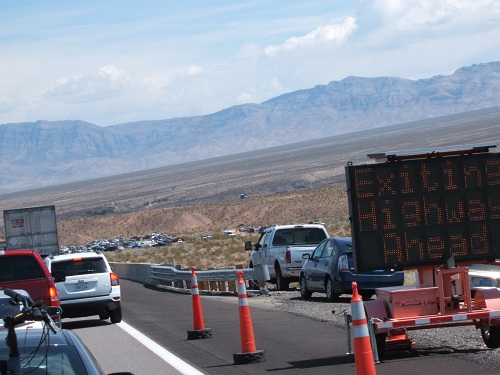 It took nearly an hour to drive the eight miles back toward the real staging area. The police had pinched the freeway down to one lane. This did not make those passing through happy, but it does make sense in cutting the speed down.

Later, whenever I was near the road, it was interesting to hear the mix of honks and shouts of support on the one hand and occasional insults thrown out at the crazy occupiers on the other. The most interesting to me was a lady of probably seventy years old who was riding on the back of a tri-wheel motorcycle. She yelled non-grandma-becoming language that begins with an F, telling us our traffic jam had ruined her day. She was sporting two flags off the back of her bike, an American flag and an POW/MIA flag. 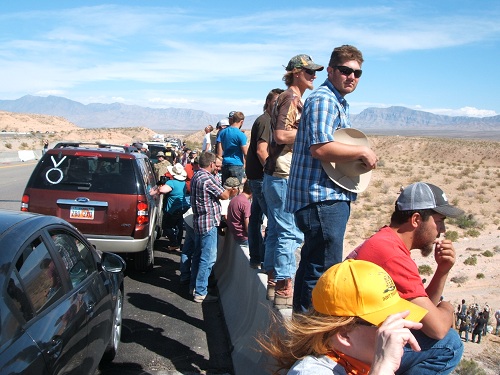 When they first announced the cattle would be returned, I assumed they meant someday soon. They actually meant very soon. The protesters now became celebrants and settled in for the wait. The request, respectfully made, of those below the bridge was to move out and to the side so the cattle could come through. The request made to everyone was to not cheer or otherwise spook the cattle. Despite the overwhelming male representation in this photo, there were actually many woman, and all ages were represented. It was a lot of fun meeting so many of people from all walks of life, from scary-looking dudes who ended up being nice to nice-looking grandmas who ended up being scary. I ran into high school kids I'll be teaching again Monday and ones I taught years ago.

Meeting Darin Bushman, the Piute County Commissioner who triggered the "Better have funeral plans" comment from the NV official was like meeting a celebrity in its way. Someone on an internet chat board going by Smokingman ("X-Files" allusion, yes?) at the InGunOwners.com forum must have ten thousand friends because his online shout out to Loyal 9 brought a noticeable burst. Thanks, Smokingman and others who passed on what we are doing.

As we waited, the freeway traffic was blocked to allow the BLM soldiers to enter the highway to leave the area. Eighty-two vehicles passed (some lady counted), many pulling trailers with atv's. Some of the cars were marked, others not so, and whether they were unmarked but official vehicles, or those of private citizen mercenaries, I do not know. One young man had a little dog with him who would bark and snarl at everyone of these BLMsoldier vehicles, but didn't make a peep for any other vehicles (and that is the truth).

I wish in this final picture that you could better see the flag carried there in the center of the herding cowboys. 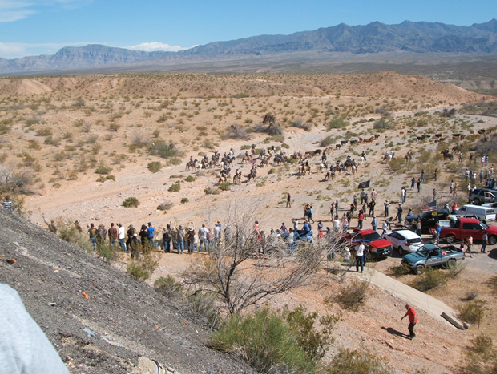 I didn't know cows could make me cry.


Who knew you were such a rebel


awesome! thanks for going!


Good stuff. The "videos worked" If there enough of us.


Great piece you did here. But the fight is no where near over. Harry Reid and the rest of his sub-human counterparts will be pulling every underhanded trick in the book now.


I agree with Scott. I think the land has been sold already... Underhandedly. I'm sure the ~86 big trucks that pulled out of there are regrouping somewhere, vamping up another plan. I hope not; I hope I'm wrong. Thanks for the nice writeup.


I think the "flipping off" salutes to the BLM people as they left probably even further infuriated them to come back. That was not a good thing to have done.


Thanks for getting this to us down here in CA. We stand with Bundy!

Taxation follows public debt, and in its train wretchedness and oppression.

The United States of Dysfunction, by Carl Jarvis

The hour is grave because of what we have forgotten.

And now there are two (er, three?). Did it matter which? After watching the debates, it seems being AGAINST Liberty is now a campaign technique. And the winners are . . . (not the Bill of Rights).


Be Afraid: The FCC Internet Grab -- In the Insiders' Own Words

Take a failed issue. Give it a righteous new name. Get people begging for government salvation. Ram the details through in secrecy. Paranoid indeed.

A must read: on the surface it is about the people who work behind the scenes for Trump. More deeply, it is an expose on the way the world really works. How are we brought to believe what we believe?

Blake Neff, via the Daily Caller

How do banks keep fees high and rates they pay low despite "Competition"? They're all owned by the same people.

Haven't we been pre-warned about sacrificing freedoms in exchange for security? We must understand that the freedom is inherently ours and not given to us by any man or form of government.